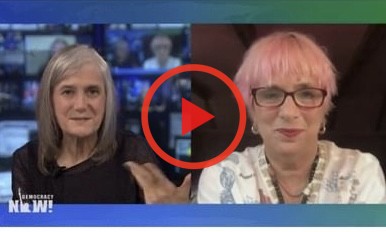 V on Democracy Now: “Disaster Patriarchy”: V (Eve Ensler) on How the Pandemic Has Unleashed a War on Women

The pandemic has led to a sharp rise in gender-based violence, job losses in female-dominated industries, greater parenting duties for mothers, and other pressures that primarily fall on women around the world. These effects amount to a kind of “disaster patriarchy” in which “men exploit a crisis to reassert control and dominance and rapidly erase the hard-earned rights of women,” says V, the artist and activist formerly known as Eve Ensler. “Women are losing their safety, their economic power, their autonomy, their education, and they are pushed onto the frontlines, where they are often used, unprotected and sacrificed.”