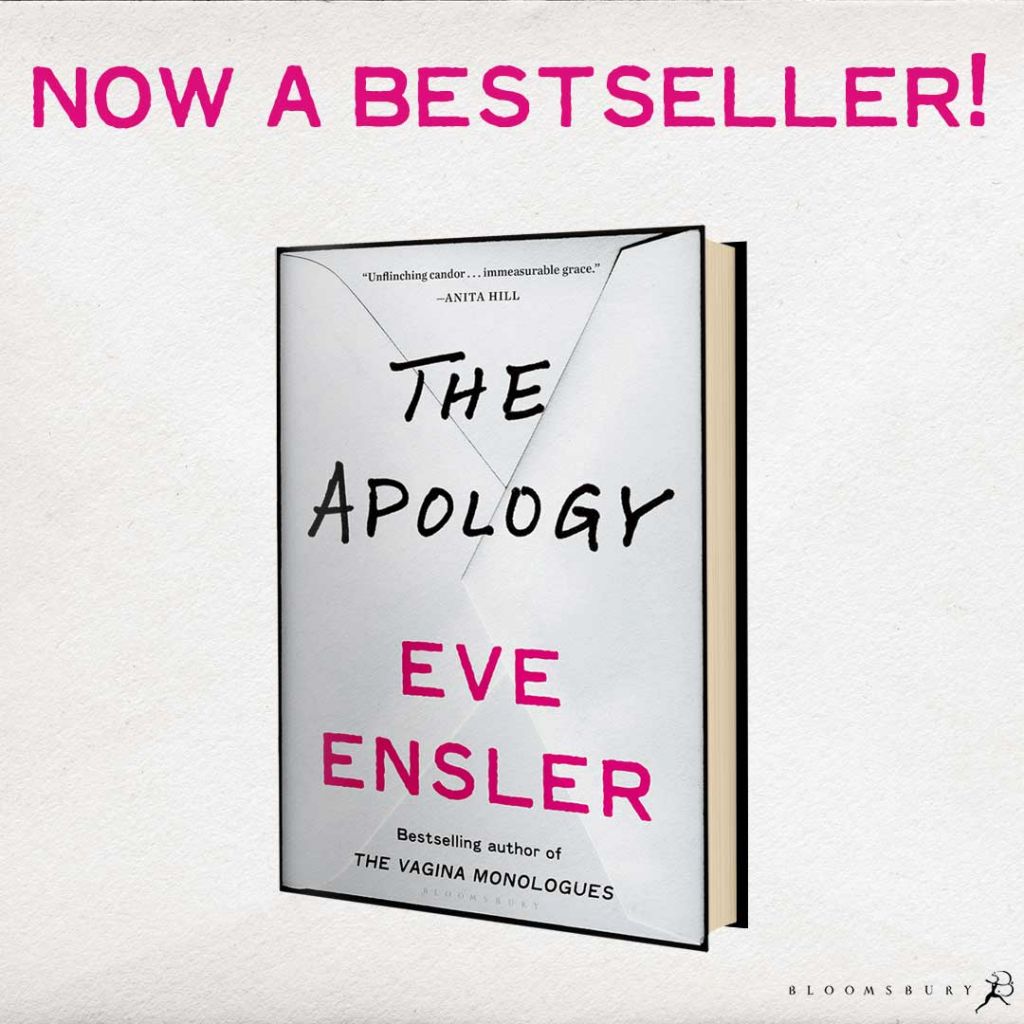 A New Book, Now Out, Sparks Revolutionary Conversation in the Media, and Calls for Transformation

“As only she can, Eve Ensler shares the story of her father’s ultimate betrayal with both unflinching candor and immeasurable grace. Through sheer creative force, she takes us on her own journey to healing. Though Ensler’s story is deeply personal, its lessons are universal.” —Anita Hill

“In this triumph of artistry and empathy, Eve Ensler leaves us with a transformative question: what if the words we most long to hear from another can be located within ourselves? Navigating the rocky rapids between intimacy and annihilation, contrition and forgiveness, autonomy and interdependence, this is a book like no other. Few will emerge unchanged.” —Naomi Klein

“…one of the most shatteringly brilliant books I have read. As soon as I finished it, I read it again, and again, and again (really).” — Decca Aitkinhead The Sunday Times of London

“The geometry of toxic masculinity is contained in these pages.” — Marc Maron

“The book is as much a powerful reckoning for her father as it is for certain endemic strains of patriarchy that have necessitated that such characters always exist.” – Brandon Yu, The San Francisco Chronicle

“Profound, imaginative and devastating book … with a moving power and poetry in the prose that rouses Arthur from his grave and holds him to account.” – Arifa Akbar, The Guardian

“The most anticipated post-Weinstein release, is The Apology by Eve Ensler” – Sunday Times of London Spring Culture Guide

Amazon.com: For anyone delving into this slim but profoundly powerful book, fair warning that it could be triggering. Eve Ensler (The Vagina Monologues) was sexually and physically abused by her father from the ages of 5-10. When he died, he hadn’t taken any accountability for the horrors he visited upon his daughter and the impact it had on her life. The Apology is written by Ensler in the form of a letter from her father to her, outlining his crimes and asking forgiveness–a brutal purging that provides a pathway to Ensler’s healing (and hopefully that of other survivors). With HBO’s Leaving Neverland, the scourge of sexual abuse is very much at the forefront of the cultural conversation right now. The Apology, out in May, promises to be a potent and extraordinarily compassionate addition to it. —Erin Kodicek

“This imagined voice of an abusive father from the limbo of the afterlife is as intimate as it is alarming, and in crafting a letter one survivor may yearn for, Ensler taps into a broader struggle, searching to hold perpetrators accountable … Those seeking a greater understanding of psychological manipulation will appreciate this potent examination.” —Kirkus Reviews

FROM BLOOMSBURY: From Eve Ensler, author of one of the most influential works of the twentieth century–The Vagina Monologues–and one of Newsweek‘s “150 Women Who Changed the World,” comes a powerful, life-changing examination of abuse and atonement.

Like millions of women, Eve Ensler has been waiting much of her lifetime for an apology. Sexually and physically abused by her father, Eve has struggled her whole life from this betrayal, longing for an honest reckoning from a man who is long dead. After years of work as an anti-violence activist, she decided she would wait no longer; an apology could be imagined, by her, for her, to her. The Apology, written by Eve from her father’s point of view in the words she longed to hear, attempts to transform the abuse she suffered with unflinching truthfulness, compassion, and an expansive vision for the future.

Through The Apology Eve has set out to provide a new way for herself and a possible road for others, so that survivors of abuse may finally envision how to be free. She grapples with questions she has sought answers to since she first realized the impact of her father’s abuse on her life: How do we offer a doorway rather than a locked cell? How do we move from humiliation to revelation, from curtailing behavior to changing it, from condemning perpetrators to calling them to reckoning? What will it take for abusers to genuinely apologize?

Remarkable and original, The Apology is an acutely transformational look at how, from the wounds of sexual abuse, we can begin to re-emerge and heal. It is revolutionary, asking everything of each of us: courage, honesty, and forgiveness.

Pre-Order Your Copy Today from Amazon, Barnes and Noble and Indie Bound
http://smarturl.it/theapologybook

Check out where Eve will be in On the Move

Praise for The Apology

“Eve Ensler’s The Apology is both an excoriation and an act of startling forgiveness.  Even as it depicts jaw-dropping cruelties, it probes the complexities and layers that underlie what could, in lesser hands, appear as the opaque surface of pure evil.  Eve Ensler unflinchingly increases our understanding of the human experience even at its darkest, which is quite possibly a writer’s, any writer’s, most significant contribution.” —Michael Cunningham

“Accusation and punishment of the guilty is one critical step in reckoning with abuse. Eve Ensler offers another crucial step forward: the deep self-reckoning and accounting that a true apology requires. This is an urgently needed book right now.” —Jane Fonda

“This book was written for people like me who find apologies without explanation to be perfunctory, unsatisfying and sometimes even infuriating.  What one really wants is an explanation for why the hurt was done, an honest vetting of the pain that caused the pain, and clear-eyed recognition that an explanation–however wrenching– is not an excuse.  Eve’s book is a guide for those who have never received the apology they deserve, and for those who know there is one they’ve yet to give.” —Kimberlé Crenshaw

“The Apology is the raw, unfiltered story of Ensler’s abusive father’s violence and domination against her, imagined from his point of view. It is of course profound and theatrical, literary and sometimes funny, as all of Eve Ensler’s work is, and it goes without saying, it’s courageous, transformative, and yes—healing.” —Anne Lamott

“This is one of the most original and profound books of the decade. For anyone who has ever been hurt by somebody they love, it will be deeply transformative. Twenty-five years ago, Eve Ensler transformed how women think about their bodies. With this book, she will change how all of us think about our souls.” —Johann Hari, author of Chasing the Scream and Lost Connections

“The Apology is a brave step toward radical healing-not just for Eve Ensler, but for all those who accept her invitation to confront the trauma of sexual abuse and find the apology they might never hear. But Ensler’s book can also be seen as an invitation to men and a roadmap for the apologies that need to be made.” —Tony Porter, CEO, A Call to Men