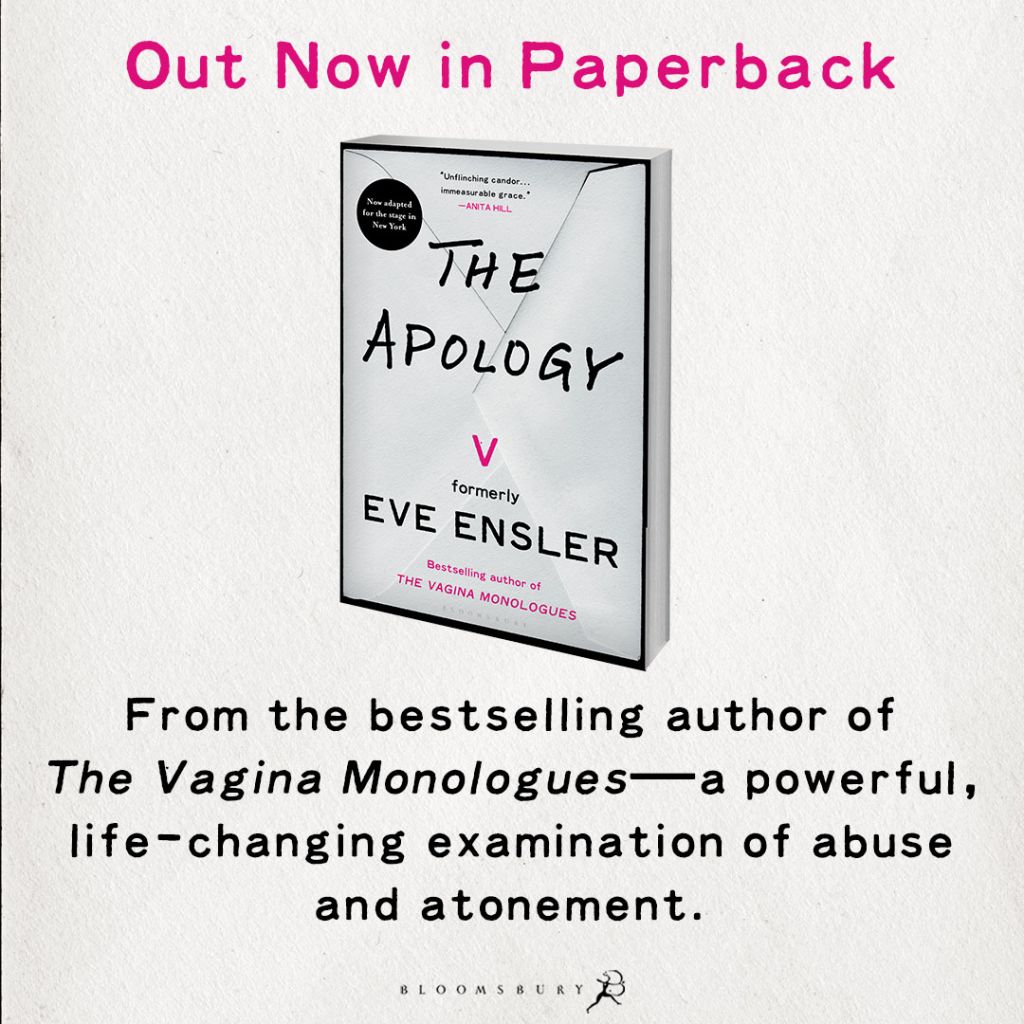 The Apology:Now available in paperback

The best-seller, Amazon book of the year (2019), published in nearly 20 languages is now available in PAPERBACK!

“…one of the most shatteringly brilliant books I have read. As soon as I finished it, I read it again, and again, and again (really).” – Decca Aitkinhead, The Sunday Times of London

“The Apology” contains the words that Ensler needed to hear her father say. It’s a slim book of unbearable heft. The text is presented as a letter written by her father from a kind of void beyond the grave, “floating, unmoored, spinning.” – The Washington Post

“For those men-the famous and the unknown- The Apology is a blueprint of contrition.” – Ron Charles, The Washington Post

“Profound, imaginative and devastating book … with a moving power and poetry in the prose that rouses Arthur from his grave and holds him to account.” Arifa Akbar, The Guardian

Like millions of women, V (formerly Eve Ensler)  has been waiting much of her lifetime for an apology. Sexually and physically abused by her father, V has struggled her whole life from this betrayal, longing for an honest reckoning from a man who is long dead. After years of work as an anti-violence activist, she decided she would wait no longer; an apology could be imagined, by her, for her, to her. The Apology, written by V from her father’s point of view in the words she longed to hear, attempts to transform the abuse she suffered with unflinching truthfulness, compassion, and an expansive vision for the future.

Through The Apology, V has set out to provide a new way for herself and a possible road for others, so that survivors of abuse may finally envision how to be free. She grapples with questions she has sought answers to since she first realized the impact of her father’s abuse on her life: How do we offer a doorway rather than a locked cell? How do we move from humiliation to revelation, from curtailing behavior to changing it, from condemning perpetrators to calling them to reckoning? What will it take for abusers to genuinely apologize?

Remarkable and original, The Apology is an acutely transformational look at how, from the wounds of sexual abuse, we can begin to re-emerge and heal. It is revolutionary, asking everything of each of us: courage, honesty, and forgiveness.