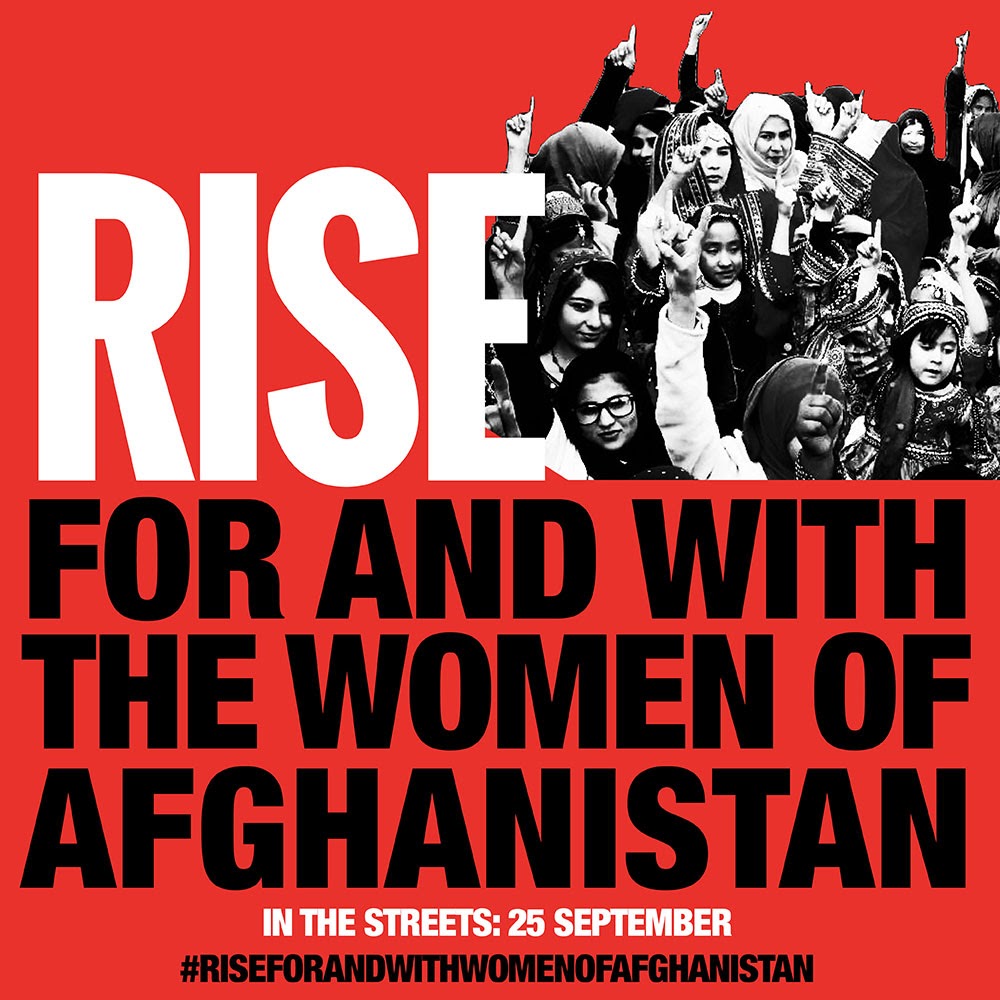 JOIN ME: Sept 25, We Take to the Streets in a Day of Global Solidarity: RISE For and With the Women of Afghanistan

I hope this finds you well amidst these difficult times. I am writing with the great hope that you will join us at events happening around the world.

Together individuals and groups from over 85 countries have come together as a global solidarity campaign: RISE FOR AND WITH THE WOMEN OF AFGHANISTAN. On Saturday, September 25, we will take to the streets in a global day of action during which activists, women’s organizations, human rights groups, and high profile individuals will mount in-person events in cities, towns, and areas across the globe.

“We take our lead from our Afghan sisters – activists who have amplified the on-the-ground realities and needs for over twenty years, working tirelessly and creatively to support women and girls and their families amidst an endless, imperialist war. Women of the world and our allies stand with the women – and all vulnerable groups – of Afghanistan against imperialism, militarism, fundamentalism, and fascism. None of us are free until the women of Afghanistan are free. We stand with the women of Afghanistan who believe women have the right to education, to travel, to freedom of movement, to jobs, to security, just having freedom to be able to breathe and be.”  – joint statement from RISE FOR AND WITH THE WOMEN OF AFGHANISTAN, Global Solidarity Campaign

We cannot underestimate the power of our solidarity.  Bearing witness to the violence and fear the Taliban is unleashing on Afghanistan will send a powerful message to the Afghan people – and women specifically – that they are not alone.  Just as importantly, it will remind the Taliban that we see what they are doing and will not back down until all Afghan people live with the full human rights they deserve.

See you in the streets!

RISE FOR AND WITH THE WOMEN OF AFGHANISTAN

FOR MORE INFORMATION ABOUT THE CAMPAIGN: RISE WITH AND FOR THE WOMEN OF AFGHANISTAN –
VISIT https://www.onebillionrising.org/afghanistan/
READ our list of demands and list of partners and about the 1 Sept Solidarity, ORGANIZATION sign on» Or email us at creative (at) vday.org
Access the social media toolkit here and spread the word on social media. Use the hashtags: #RiseForAndWithWomenOfAfghanistan #StandWithWomenofAfghanistan