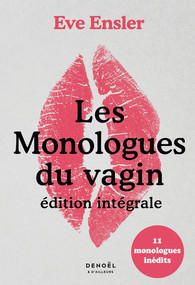 Since its publication in the United States in 1998, The Vagina Monologues has triggered a real cultural phenomenon: rarely has a play been performed so many times, in so many different places, in front of such diverse audiences… But what are these Monologues in which all women identify? It is no more and no less the touching and funny celebration of the last of the taboos: that of female sexuality. Mischievous and sassy, ​​tender and subtle, Eve Ensler’s masterpiece gives voice to women, their most intimate fantasies and fears.
Whoever reads this text no longer looks at a woman’s body in the same way. Whoever reads this text no longer thinks of sex in the same way.
This expanded version, published in the United States in 2018 on the occasion of the 20th anniversary of the publication of Monologues , includes eleven new monologues and poems.
To Order